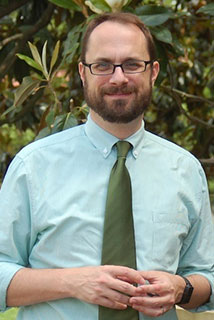 About: Ross White is the director of Bull City Press, a Durham, NC press publishing chapbooks of poetry and fiction, including the winner of the annual Frost Place Chapbook Competition. He is the author of How We Came Upon the Colony (Unicorn Press), and his poems have appeared in American Poetry Review, New England Review, Best New Poets, and The Southern Review, among others. His honors include the Pocataligo Poetry Prize from Yemassee, the James Larkin Pearson Prize, the Gladys Owings Hughes Prize, and scholarships from the Bread Loaf Writers’ Conference. He teaches creative writing at the University of North Carolina at Chapel Hill and the North Carolina School of Science and Mathematics.

Find Ross in the Directory of Members

Do you have a favorite line from a book?
Oh, heavens, yes. The last stanza of Brigit Pegeen Kelly’s “Dead Doe,” from Song, breaks me every time. “Child. We are done for / in the most remarkable ways.” Sometimes I wake up with those lines in my head.

Is there a book that made you fall in love with literature?
I cannot understate how important William Matthew’s collection Flood was to me. It came out several years before I was born, so when I discovered it, it was already a little over twenty years old. It was the first book of poems that I understood as a collection, where I could see the whole arc but could savor each poem as its own discrete entity.

What are you reading right now?
I’m usually a one-book-at-a-time kind of person, but right now, I’m reading Sunil Yapa’s Your Heart is a Muscle the Size of a Fist, George Saunders’ In Persuasion Nation, and Laura Cronk’s Having Been an Accomplice.

Who are your favorite literary publishers?
I’d be negligent if I didn’t mention Four Way Books. I have always loved their catalog, and when I started Bull City Press, FWB director Martha Rhodes was always there with advice when I needed it. She placed the first standing order with us. It was that kind of support.

I also love Persea Books, Alice James Books, YesYes Books, Black Lawrence Press, BOA Editions, University of Utah Press, Pleiades Press, Northwestern, Pittsburgh, CavanKerry, Carolina Wren, and Elixir. I just got Megan Levad’s Why We Live in the Dark Ages, and I’ll be checking out Tavern Books’ gorgeous hardbacks soon. For chapbook-only presses, Organic Weapon Arts is doing some of the best work in the business, but I also love Dancing Girl and Backbone. And I’m thrilled every time I see a new title from Unicorn Press, but that’s cheating a little since they published my chapbook. Still, if you’ve seen the new books from Chiyuma Elliott and Hastings Hensel, you know what I’m talking about.

Is there a manuscript published in the last ten years that you wish had come across your desk?
I’m glad you asked this now, because in a couple of months, I’d have missed the window for answering Ross Gay’s Against Which. I feel like I have a magical relationship with that book; it appeared on my shelves in 2008, and I’ve never quite figured out how it got there. I was looking for something else entirely, and there it was, alphabetized. Baffled, I pulled it down and devoured it in a single sitting. From the first poem, I was simply enthralled. Over the years, I’ve tried to figure out how that book made its way into my collection, and I’ve been stymied at every turn. Did the poetry elves break in and leave it for me because they knew it was the perfect book for me?

What is the best advice that you can give an aspiring writer?
I meet so many young writers who can’t separate the work of writing with the work of sharing the writing. Each takes an almost criminal amount of grit, but they leave writers vulnerable in such different ways. And too often, a young writer has found the courage to persevere, to polish a poem or story into something remarkable, only to send it out once, experience rejection, and assume that the story must be broken.

I always try to remind writers that editors are human and therefore fallible. Somewhere along the line, many young writers come to believe that we stand at the gates to Valhalla, touching a sword to the shoulders of the worthy, chopping off the heads of the unworthy, forever resigning them to a life of anonymity, as we laugh capriciously. Um, no. I work in a basement. Sometimes in my pajamas.

When editors open the submissions manager, I think we always try to approach the work from a place of generosity and enthusiasm. I think we always hope (pray!) that the next submission will be the one to wake us up, rough us up, whatever metaphor you prefer for the piece so good we have to accept it. But we can so easily be moved into a place where we’re not capable of the same commitment to generosity, the same enthusiasm. The littlest things can do that: another project moves past a deadline. The demands of the day job—most of us have them!—were particularly stressful that day. Gas station sushi.

So I push young writers to separate the worth of their work from the publishing world. They have to develop an internal barometer for quality, one that’s not entirely divorced from the contract with the reader but not discouraged by rejection from editors. Because rejection, so often, isn’t even feedback. If the writer can’t yet trust his or her own internal barometer, then a handful of supportive yet honest readers will be that much more important.

What is your favorite AWP Conference memory?
The first time AWP blew my mind was when Beth Ann Fennelly read “Daddy Phase” in her evening reading at the 2007 conference in Atlanta. But my favorite memory was a few years later. My mother is a fiction writer; she started working on a novel right around the time I finished my MFA. She lives in Denver, so we attended the 2010 conference together. It’s not like I was a grizzled veteran at that point, but it was great fun to be with her as she experienced her first conference; she’d come out of panels with her head spinning. In between sessions, she’d come hang out at the Bull City Press table, and after someone stopped by to chat, she’d ask who I’d been talking to and how I knew them. At one point, Sherman Alexie stopped to talk to us for a couple of minutes, and after the conversation, when I told her who it was, she went and chased him down to gush for a few minutes about his work. At the time, I was a little embarrassed, but as the years go by, I treasure that moment more and more. Not every writer has that kind of support from a parent. If I’d had more presence of mind, I’d have chased Sherman down with her and gushed, too.

How has AWP helped you in your career or creative endeavors?
Being a small press publisher can be daunting. I remember going to an AWP panel—I think it was the first panel I ever attended, at the Atlanta conference in 2007—about starting a press, and when asked what advice they would give someone who was thinking about starting a press, every publisher up there said, “I’d tell them, ‘Don’t do it.’” And if you’re a reasonably new press, you deal with an endless barrage of “print is dying” and “poetry doesn’t sell” and “publishing is a dinosaur.”

But, look. I go to AWP every year and see hundreds of small presses and magazines in the bookfair. Books aren’t in danger. Poetry has a voracious audience. Publishers aren’t in danger of fossilizing. How can anyone working for a small press look across the bookfair, at all of those tables and booths and the thousands of people buying books, and feel anything other than elation?

The first year Bull City Press had a table—we were sharing with BLOOM—I was just happy that BLOOM’s readers stopped to talk to us, too. No one knew about the press; a few people had heard of Inch. But over a period of a few years, we went from anonymity to destination: a wonderful small army of readers now stops by for whatever’s new. AWP has given us an avenue to connect and reconnect with the best readers in the world. For that, I am endlessly grateful.