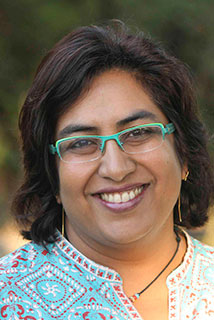 Minal Hajratwala is author of the award-winning epic Leaving India: My Family’s Journey from Five Villages to Five Continents, which Alice Walker called “incomparable” and The Washington Post, “searingly honest.” She is also editor of Out! Stories from the New Queer India. Her latest book is Bountiful Instructions for Enlightenment, published by The (Great) Indian Poetry Collective, of which she is a co-founder. As a writing coach, she loves helping people unblock, finish their books, and write winning proposals.

Find Minal in the Directory of Members

What are you reading right now?
I'm devouring everything by Haruki Murakami. Also: One Part Woman, a sensitive novel by Perumal Murugan that has been brutally censored in India. For teaching, I'm reading the second Tin House anthology of craft essays and the Wingbeats book of poetry prompts; my current class is doing a lot of freewriting, so it's all exercises all the time in my brain right now. Everything I read is turning into a writing prompt.

Do you have a favorite line from a book?
From Franz Kafka's collection of letters to his fiancée: "A book should be an axe to shatter the frozen sea within us."

What is the best advice you can give to an aspiring writer?
Read, read, read. Read more than you watch TV or movies or cat videos. Read more than you tweet. In particular, read: Hélène Cixous's Three Steps on the Ladder of Writing, which has the marvelously useful line, "The writer is a secret criminal," and Toni Morrison's Playing in the Dark: Whiteness and the Literary Imagination, which will teach you everything you need to know about the deep dangers of clichés and how to do a close reading of a text. If you're not sure how or what to write, learn to freewrite and do it regularly and don't stop. Either Natalie Goldberg or Julia Cameron Mitchell can talk you into it. There are other ways to write, but sooner or later you will want this tool in your toolkit.

How do you like to receive queries? What will automatically end up in your “we’re not interested” pile? What will catch your eye as a manuscript that needs a closer look?
We have an open call right now for our Emerging Poets Prize, judged by Jeet Thayil, and this is the only time we're accepting submissions this year. It's very detailed about who and what we're eager to publish.

There are two problems we often see in contemporary Indian poetry. One is that there is a great deal of poetry that is overly derivative of other poetries; we're disinclined toward this, so we are not, for example, going to publish a manuscript that is all haiku. The other is almost the opposite, a complete lack of structure and rigor, a tendency toward the cliché or the easy image—say, a bird outside the window sings a song that makes the poet think of hope, or mortality, or something like that. Manuscripts that pay keen attention to craft and have a strong sense of voice will thrill us. We'll also be looking closely at people who give thoughtful, clear answers about why they want to publish through a collective press in the Statement of Purpose we ask them to submit. We also publish a poem of the week through our inPoetry app. Publishers of journals and books are welcome to send us poems that they'd like us to consider for the app.

What does your office look like?
Our office is a Google Drive full of documents, since the three of us are variously located in Bangalore, New York, and the San Francisco Bay Area. We're quite the global enterprise and we've had to teach ourselves a fair amount of technology to keep our virtual office up and running.

What would be your advice to new AWP members on how to make the most of their membership?
Go to a conference and focus on meeting your peers and the people who are maybe one step ahead of you; you'll get more from those nurturing those relationships than from book signings by superstars. If you think you can't afford it, check out the volunteer registration options. If you're an introvert (like me), I wrote a piece for you over at The Writer magazine's blog about navigating the giant convention and bookfair.

What is your favorite AWP Conference & Bookfair memory?
Two years ago at AWP Boston, Alice James Books was celebrating its 40th anniversary, and we'd just started The (Great) Indian Poetry Collective in India. I raised my hand during the Alice James panel to ask their advice, and I started by saying, "We've just started a collective press in India, and—" and the audience spontaneously burst into applause. The Alice James folks were so sweet and encouraging, as were the poets on the Dark Room Collective panel at the same convention. It was amazing to see how these collectives of poets had made history, and to receive their blessings on our fledgling enterprise. At that point we just had a dream and a postcard we'd printed up about the "press"; we had yet to publish a book. This year we'll be at the Minneapolis convention with three published books, and more in the pipeline, thanks in part to the encouragement and ongoing connections made through AWP.