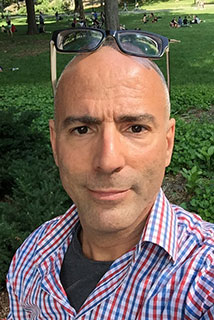 About: Michael Broder is the author of Drug and Disease Free (Indolent Books, 2016) and This Life Now (A Midsummer Night’s Press, 2014), a finalist for the 2015 Lambda Literary Award for Gay Poetry. His poems have appeared in journals including American Poetry Review, Assaracus, BLOOM, Columbia Poetry Review, Court Green, OCHO, Painted Bride Quarterly, and other journals, as well as in numerous anthologies. He lives in Brooklyn with his husband, the poet Jason Schneiderman, and a backyard colony of stray and feral cats.

Find Michael in the Directory of Members

Tell us about the HIV Here & Now Project. How did it come to be?
Actually, it was at AWP 2015 in Minneapolis. I was part of an LGBT poetry reading at the Central Library on Thursday, April 9, at 9:00 a.m., sponsored by Minneapolis-based Intermedia Arts and organized by John Medeiros and Andrea Jenkins, co-curators of the long-running Queer Voices reading series. I noticed that a number of the poets, including me, were reading poems about long-term survival with HIV. This is something we have not seen before, I thought to myself as I sat in the audience after my turn at the microphone. This is the first time in the history of the world that a population of gay men over fifty was living for twenty years or more with HIV. We need a new poetry anthology to represent this, I thought. And the HIV Here & Now Project was born. As I thought about it over the course of the weekend, I realized I wanted to include a range of voices: all, races, genders, sexualities, HIV-positive, HIV-negative, living with AIDS, on treatment, off treatment, on PrEP, in a serodiscordant relationship, survivor of a person who had died of AIDS—any and all possible configurations of relation to HIV here and now. Back in Brooklyn, as I began to solicit and post calls for submissions, I realized I needed the website and the online poem-a-day countdown to thirty-five years of AIDS on June 5, 2016, as a way to raise awareness not only about the project, but about the issues.

What is your project’s mission?
In the first instance, our mission is to capture the wide range of voices coming from poets embodying the lived experience of HIV here and now. To this end, we mounted the online yearlong poem-a-day countdown to thirty-five years of AIDS on June 5, 2016. Now we are finalizing the manuscript for a print anthology based on the online countdown (to include about a third of the 367 poems that were part of the countdown). As the project evolved, however, we developed a broader advocacy mission alongside the initial poetry project. The HIV Here & Now Project advocates for an end to the HIV epidemic via the arts, starting with poetry but not limited to poetry. The advocacy mission is articulated concisely by the hashtags we use on every social media post: #hivtest, #hivtreat, #hivprevent, #nohivstigma, #nohivshame.

What does your community seem to want the most from your project?
There are multiple communities, really. Poetry readers loved the poem-a-day countdown, loved it, came to expect it and rely on it. There was a collective sigh of bereavement on Facebook and Twitter on June 6, 2016, when there was no new poem posted. That’s why I’m mounting a little “bonus season” in the form of a poem-a-day lead-up to World AIDS Day on December 1, 2016. Poets wanted an opportunity to publish, but where I had hoped for an ongoing deluge of submissions, it was often like pulling teeth (using universal precautions, of course, to prevent exposure to blood products [just a little HIV humor there]). I think that’s because many people, even many poets, who have a connection to HIV Here & Now don’t know they do, or know they do but don’t want to admit it, or think about it, or address it in their poetry for fear of being associated with HIV in a way they are not comfortable with. I have no scientific research to back up this claim. But I do have a number of experiences in which poets I solicited told me they had “nothing suitable” for the project. Now, I know that poets love challenges. So no poet should have “nothing suitable” for virtually any topic: you’re a poet; write a poem. And yet…. So, this very phenomenon of poetic discomfort with HIV is one of the things I want to address via the project moving forward.

Since its inception, what are some of the proudest accomplishments of the HIV Here & Now Project?
Of course, the online poem-a-day countdown to thirty-five years of AIDS on June 5, 2016 is my proudest accomplishment to date. I love the fact that it started with me and ended, 366 poems later, with Ada Limón, my dear friend and a National Book Award finalist, who wrote a poem called “AIDS” especially for the project (so much for “nothing suitable”), about the fact that when she was little, the kids called her “Ades,” short and affectionate for “Ada,” but how once they learned the new meaning of “AIDS,” they stopped calling her that—they learned silence. Wow. Leave it to Ada, right? Damn, now I’m crying…again! So, given that example, I’d have to say the participation of individual poets is also something that gave me many moments of great pride. Ada, Jennifer L. Knox, Elizabeth Alexander, Phillis Levin, Jericho Brown, Danez Smith, Jason Schneiderman…the list goes on and on—for a total of 367 poems and almost as many different poets (I let one or two repeats slip through). And my press, Indolent Books, is still “milking” the HIV Here & Now Project for authors, starting with Robert Carr, whose debut collection, Amaranth, appeared on Indolent in 2016. Now I’ve got Stephen Zerance and James Diaz under contract, both of whom came to my attention through their submissions to HIV Here & Now.

What is your vision for the HIV Here & Now Project? How do you see it growing ten years from now?
My vision for the HIV Here & Now Project is a world where the arts contribute to the end of the HIV epidemic by increasing awareness, combatting ignorance, shame, and stigma, and helping at-risk individuals and groups connect with testing, treatment, and prevention services. Come for the poetry (art, music, dance, theatre), stay for the HIV testing in the mobile testing unit from Mount Sinai parked right outside the theatre, and depending on your test results, get linked immediately to treatment or prevention services like primary medical care, antiretroviral therapy, or PrEP. Crazy, right? I know. That’s how I know it’s worth doing.

How has your understanding and use of social media, particularly as it relates to advocacy, changed since you began this project?
Starting the website and the online poem-a-day countdown was really all about leveraging social media to increase awareness about the project and about the advocacy agenda (#hivtest, #hivtreat, #hivprevent, #nohivstigma, #nohivshame). Just this very morning, while getting into the shower, of all things, I got the idea for the next phase of the project: inviting people to submit selfies that represent HIV here and now—sort of like those old “This Is What a Feminist Looks Like” T-shirts. I will post the images on the website but also (and more importantly) on Facebook, Twitter, and most of all Instagram. The goal is to come up with tactics that engage audiences with the issues around HIV by engaging them with the project, whether it is through poetry, other kinds of language, or other forms of expression (images, videos, sound).

What is the biggest challenge you face in promoting writing?
[TRIGGER WARNING: I’m going to use the phrase “kids today.”]
Kids today have too much faith in the Internet, digital media, and social media, and not enough regard for reality versus virtuality. They want to write a bunch of poems and self-publish a book on CreateSpace. Which could potentially be fine, if they go about it the right way, but I have not seen a lot of evidence of young poets going about it the right way. By which I mean: reading a lot of poetry; writing a lot of poetry; enrolling in a workshop at a local continuing education program; developing relationships with a few peers with whom you can share work, get feedback, and exchange moral support; attend readings and read in open mics; submit work to journals; when ready, start thinking about the book manuscript, but don’t rush to publish before you have gotten a lot of input on the work. That’s my spiel. And the challenge I face in promoting writing is communicating that series of messages effectively.

What other projects are you currently working on?
My press, Indolent Books, is producing a steady stream of new titles. I’m also an AWP Writer to Writer mentor for the second fall season in a row. And then there’s my own poetry, for which there is not enough time. But I have two distinct book projects taking shape in my imagination.

What are you reading right now?
How to Be Drawn, by Terrance Hayes; The Fields of Praise: New and Selected Poems by Marilyn Nelson; The Complete Poems of Anne Sexton.

For every young person: anything by Raymond Williams, Fredric Jameson, Jonathan
Dollimore, or Alan Sinfield.

What is your favorite line from a book?
“Petrograd smelt of carbolic acid.”