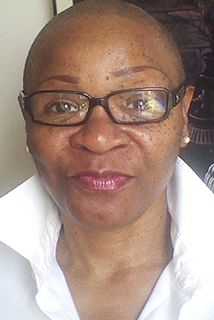 About: Lorraine Currelley is a mental health counselor, poet, and writer, and the founder and executive director of Poets Network and Exchange. Her work is widely anthologized. She is a board member at Pen to Mind Books & Child Development Concepts, Inc., as well as an adviser for Writing for Peace.

Find Lorraine in the Directory of Members

What is your organization’s mission?
Poets Network & Exchange is committed to providing a safe, supportive, and welcoming space for poets and writers at all levels. We’re committed to producing, developing, and facilitating literary programming and events that include poetry and prose readings, creative writing workshops, an open mic event, panel discussions, and a scholar lecture series. Scholars of various disciplines are invited to lecture and facilitate workshops.

What is the biggest challenge you face in promoting writing?
I would have to say the biggest challenge is funding for programming and technology. In the future I would like to employ an individual or business whose sole function is to promote and focus on audience development via technology. This would allow me time to focus on administrative, creative, and programming responsibilities.

Do you offer any free events to your community members?
Poets Network & Exchange has never charged an admission fee for our events and programming, nor have I received a salary or payment of any kind. We’ve done this successfully for four years. We seek out free and affordable spaces. We have received funding from Poets & Writers for our featured poets and writers.

What does your community seem to want most from your organization?
My community seeks opportunities for literary and educational enrichment. They want opportunities to participate in writing workshops, expand their knowledge of craft, share their work, and converse with members and guest writers and poets.

If you were giving a tour of New York City, to which literary landmarks would you take your guests?
I would take tourists to the Countee Cullen branch of the New York Public Library. This branch was one of the leading literary gathering spaces during the Harlem Renaissance. It’s a historically/herstorically rich institution. I would also arrange a tour of the Harlem YMCA on 135th Street, where several literary figures resided, among them Langston Hughes and Claude McKay. It was a prominent theatrical and literary haven featuring actors Harry Belafonte, the late Ruby Dee, and Ossie Davis among many others in the 1930s, 1940s and 1950s. I am proud to add my names to its list of residents. Also included in our tour would be the Schomburg Center for Research in Black Culture. The Schomburg houses a wealth of resources and information, and it remains a prominent institution featuring educational, cultural, and historical events and programming.

What are some of your organization’s greatest accomplishments thus far?
Some of my proudest moments have been seeing seniors writing in isolation become actively engaged participants in programming. Some have gone on to publish and perform their original works before audiences. One workshop participant, Maxfield Harding, has published a memoir, Casualty. To date, my senior writing workshops have produced two publications, On the Write Path and In Our Own Words, containing original poetry and prose created in the workshops and as homework assignments. I am also proud that Poets & Writers acknowledged us this year for our work. We were one of four groups receiving funding to be invited to participate in their annual Connecting Cultures reading. Two of our members were featured readers. In 2014, we received an award from a fellow writing organization for our work on behalf of the literary community. Additionally, I am featured in Writing for Peace’s DoveTales Literary Journal, where I speak about writing.

Who encouraged you to write?
My mother and my brother, author and artist Edward Currelley, were my biggest encouragers. My mother loved reading and writing and encouraged her children to do the same. I started writing poems and essays while attending elementary school. I was raised in the neighborhood of Harlem in New York City, and spent hours daily at the Countee Cullen Library.