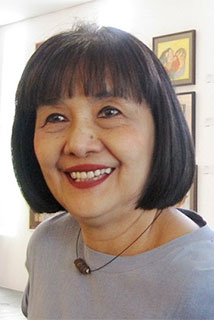 About: Upon return from exile during the martial law years in the Philippines, Jenny Romero Llaguno hastily returned to academe for her MA and PhD and then began serious writing for publication in 1988. An activist, she has been engaged for the last 29 years in the women’s movement and other revolutionary activities, marching when called for to protest inequality, racism, and exploitation of peoples and the environment. She is the coeditor of Centennial Crossings: Readings on Babaylan Feminism in the Philippines, and her first short story collection, A Woman with Money and Other Stories, was published in 2018.

What are you reading right now?
Zenzele, A Letter for My Daughter by J. Nozipo Maraire of Zimbabwe

Who encouraged you to be a writer?
My girlfriend, an anthropologist, and F. Sionil José, Filipino National Artist for Literature, who has written more than 20 novels.

Did your bilingual upbringing form you as a writer, and, if so, how?
My mother, who was a product of immense colonial mentality, grew up during the early American governance of the Philippines (early 20th century) and when the policy was to use English as the medium of instruction at all school levels. My grandmother, who rebelled against this rule, did not speak English and preferred the national language. Since she had to take care of us, I and my siblings were exposed to Filipino. My mother imposed a house rule to speak only in English, but we clearly violated this when she was not around. My mom was not a reader, so we had no books on a shelf. She had how-to books (Dale Carnegie) and a copy of Gone with the Wind, which I quickly devoured. I was otherwise attracted to Filipino comics and to serialized stories in Filipino in weekly magazines. My mom didn't buy these readables, but I remembered getting over my fear of dogs when I climbed over the fence to my cousins' house just to get hold of the comics and magazines that they bought regularly.

What also formed me as a writer? In the ’60s, before the resurgence of nationalist sentiments, almost everyone in the university wrote in English. Our studies were thoroughly anglicized and westernized. I remember reading The Brothers Karamazov, having filched the copy from my brother's desk when he had to spend time as a medical intern in a government hospital. I was stunned by the Russian novel in translation. I read every book I could lay my hands on—literature from all over the world—found in the library, borrowed from friends, some I even bought, gifts from various suitors. I was definitely hooked, intoxicated with words. But I didn't know yet that I wanted to be a writer, though I was writing short literary pieces for the university newspaper, term papers and book reviews.

After my MA, I decided that I wanted to be a writer and applied for a doctoral course in creative writing. I declared my motive to produce a fine harvest of short stories. You might ask why I didn't write a memoir instead? The answer is that I found the slippery truth in my stories to be the artistic creation that springs from them.

If you could meet any writer, who would it be? What would you say to her or him?
Alice Munro. Also Doris Lessing: if she were alive, I would tell her that I love The Golden Notebook and that I keep going back to it.

How do you balance your work as a writer and as a political activist?
I think I was raised by my working mom to be a dutiful person, so I have a very strong sense of discipline. My day is evenly divided between work and feminist advocacy. I spend mornings on housework, grooming and exercise, and reviewing my investments (checking fund price, making decisions, and acting upon them if I have to). I spend the afternoon and early evening attending meetings and meals with others (time for fellowship), then from 8 p.m. to midnight is writing, answering emails, dealing with applications, and reading (two hours). Before going to sleep, I spend downtime on reflection.

What persons in or aspects of your life’s journey have most profoundly influenced your work?
My husband greatly influenced my life's journey. When I was 46—the new young, the old middle age—I realized that my husband had expectations of me which I would never have guessed. That was 1988. We had returned home after 15 years of self-imposed exile to the US (three years) and Rome, Italy (12 years). My son was 12 years old and was no longer a small child needing constant care. With time on my hands, I decided to pursue graduate studies, knowing that I wouldn't get far in having a career without at least an MA. While in school and exposed to academe, I was offered a job as research associate at the Center for Women's Studies in my university. I accepted without even telling my husband about it. He only started asking questions when he would find me gone at 8:00 in the morning and sometimes back at 9:00 in the evening. (The latter would only happen three times a week when I had to attend evening classes for my MA course.) When he did ask where I went, I told him that I have a full-time job at the university. It was like he did not hear me for he expected me to be home when not attending classes. It dawned on me that I was not as free as I thought to do what I wanted. This was when I started raising questions about roles for women and men as assigned by society. I was on my way to becoming a feminist.

What do your books look like once you’ve finished reading them?
They still look brand new because I always finish a book within seven days, more or less.

The book you could read again and again:
Cervantes’ Don Quixote. There’s something to pick up every time you read this picaresque novel, whether a writing device or language style, even in translation; also, it is never boring, it’s fun and funny and also sad sometimes.

The book you could never read again:
War and Peace. It’s a very engaging book, but it requires deep pondering. I’ve done it once and that’s enough. Otherwise, I’ll get caught in debates with myself about history, war, heroes, love, family, friendship, honor, and courage, and I may get stuck.

Do you feel influenced by your peers to produce a certain type of creative work, or do you feel free to follow your own interests and passions?
I am not influenced by my peers though I read them. What I want to create is a re-creation of my country’s colonial history from the perspective of a character who grew up alien to it but compelled to unearth through it one’s identity.

Where do you get your best reading recommendations?
From The New York Review of Books.

What is the best lesson that you have learned from a book?
That if you find the key to the author’s narrative technique, then it becomes an easy read.

Would you like to share a project you are currently working on?
I am working on a novel and participating in one of the University of Iowa International Writing Program’s MOOCs, an ongoing workshop.

Who/what do you follow online?
The New Yorker’s Fiction section.

What is your favorite line from a book?
“What you give means so much that it can never be taken back.” Simone de Beauvoir.

Why did you decide to join AWP?
Because I want to stay connected.

How has AWP helped you in your career and/or creative endeavors?
I feel encouraged in my desire to be published more.