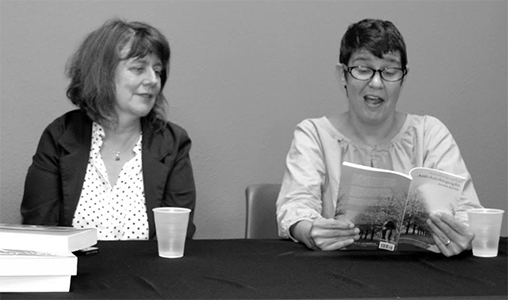 Jennifer Bartlett (right, above) and Sheila Black (left, above) worked together with poet and scholar Meg Day to propose the first ever disability caucus, which will be held at the forthcoming 2016 AWP Conference & Bookfair in Los Angeles.

About: Jennifer Bartlett is the author of Derivative of the Moving Image (UNM), (a) lullaby without any music (Chax), and Autobiography/Anti-Autobiography (theenk). She is co-editor of Beauty is a Verb: The New Poetry of Disability. She is currently working on a biography of the poet Larry Eigner.

Find Jennifer in the Directory of Members

About: Sheila Black is a poet and the Executive Director of Gemini Ink, a nonprofit literary arts center. She is co-editor of Beauty is a Verb: the New Poetry of Disability.

Who encouraged you to be a writer?
JB: I think I was born to be a poet. My father, Lee Bartlett, is a well-known critic and writer. I grew up interacting with folks like Galway Kinnell, William Everson, and Nathaniel Tarn. My father was hesitant at first because being a poet is difficult in many ways. But after he saw my dedication, he became very supportive.

SB: My father had a college friend, Leo Skir, a writer who had known the Beats and been good friends with the poet Elise Cowen. He encouraged me greatly—so did my mother, who is an avid reader.

If you could meet any writer, who would it be? What would you say to him or her?
SB: Do I have to pick just one? My top three would be William Shakespeare, Charlotte Brontë, and Jean Rhys. I don’t know what I would say. I think I would just listen.

JB: I would love to meet my favorite poets, Charles Olson and Robert Duncan. I am writing a biography on Larry Eigner, and I would love to get a fuller sense of how the poetry community at that time regarded Eigner’s severe cerebral palsy. I have been able to put together somewhat of a picture through letters, but it’s incomplete. Of living writers, I’ve made strides to connect with most of the folks who interest me. My favorite living writer is Paul Auster, and I have been lucky enough to spend some time with him.

What do your books look like once you’ve finished reading them?
JB: They are a wreck!

SB: I have a good friend who claims I can crumple up paper just by looking at it. I think that tells you all you need to know about what my books look like when I am done with them.

Which book should be required reading for young people?
SB: Primo Levi—almost anything—Survival in Auschwitz, or If This Is a Man, or The Periodic Table. He is so morally acute and alert, and I think he shows all the ways in which empathy is not easily arrived at.

JB: I don’t mean to be egotistical, but I really think all young people should read Beauty is a Verb: The New Poetry of Disability. The book contains essays as well as poems, making it an easy book to process, even for those who don’t like poetry. Ableism and the abuse of people with disabilities are still largely accepted in our culture. This manifests itself in everything from desexualization to underrepresentation in the media to the constant use of disability as a metaphor. I hope these issues are something the new generation can move past.

Do you feel influenced by your peers to produce a certain type of creative work, or do you feel free to follow your own interests and passions?
JB: Regarding the former: absolutely not! I have made friends with people who have similar interests. These interests are primarily Black Mountain, disability poetics, language poetry, and new lyricism. So, it’s reverse. I gravitate toward the folks doing similar work. I have, for example, made lots of friends via my work on Larry Eigner. But, I have to say, I’m a bit of a “dropout.” Most of the people I study are long dead, and nearly all of the people I would think of as “peers” are over 50. I don’t really feel like I have much of a space with younger poets or poets my age. I never felt support nor got published by the magazines or presses that people my age (and younger) were running. Many of the next generation (older) know my father and his work, so they tend to be supportive.

SB: I tend to be pretty stubborn in pursuing my own ideas—but I do have a few close friends who are a big influence on me. Poets Connie Voisine, Jennifer Bartlett, Louis Asekoff—they are not necessarily people who write like me, but they are people whose aesthetic I trust.

Describe your writing process.
JB: I don’t write every day. I write on the computer in the library in silence.

SB: My handwriting is so dreadful that even I can’t read what I’ve written later on. I don’t know what I would have done in the days before typewriters. I compose on the computer. I don’t listen to music. I do drink coffee and pace around in between.

Would you like to share a project you are currently working on?
SB: I just finished a book of poems called Iron, Ardent (the title comes from Emily Brontë and refers to her “Iron Man”). It is a book that considers various forms of “otherness,” especially physical disability. I am also working on a collection of very short essays about New Mexico.

JB: As I mentioned, I have been researching and writing a biography of the poet Larry Eigner. Part of this project has been teaching myself how to do research and work with archival collections. As part of the project, I’m also reading and learning the history of modernism and new American poetry. As part of my work with Eigner, I act as a consultant for publications that want to republish his work. My colleague George Hart and I put together a collection of Eigner’s letters for Poetry magazine last winter. I also have a manuscript, my fourth book, which I am “shopping around.” Finally, I am writing a memoir about experiences with my sexuality as a woman with cerebral palsy.

What is the best lesson that you have learned from a book?
JB: To be empathetic.