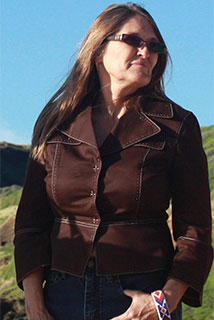 What is the mission of the Effigies series? Its vision? How do you see it growing ten years from now?
To present great poetry from Indigenous voices. To publish debut books by female Native poets, balancing the field and forming collective cogency of strength with their entries.

It would be remarkable to see an imprint develop with leadership from poets included as contributing authors to the Effigies series. Brandy Nālani McDougall has already established a micro-press, Ala Press, with Craig Santos Perez. I would love to see more presses opened by Native people, serving Native authors, and some commitment from major poetry presses with imprints.

What is the biggest challenge you face in promoting writing?
Regarding the Effigies series, preconceived notions, tokenized or marginalized expectations of what the books might be. There is an increasing demand for equality in gender representation for the wider binary, but it is less advantageous for more first books by Indigenous female poets/writers. The odds favor males or a very few females, despite the larger number of females writing and earning graduate degrees in writing.

How have you seen your membership grow and change over the last five to ten years?
The readership has developed a relationship with the series and look to it to see what the larger field is missing. Most of the poets with debut books in the original Effigies (Pacific Rim, with Brandy Nālani McDougall, dg nanouk okpik, Cathy Rexford, Mahealani Wendt, 2009) and one from the second edition (II: Mainland Continent with Lara Mann, Ungelbah Davila, Kateri Menominee, Kristi Leora, and Laura Da', 2014) have gone on to do other books. Brandy Nālani McDougall has released multiple books in poetry and has a substantial new release critical writing, Finding Meaning: Kaona and Contemporary Hawaiian Literature. dg nanouk okpik won the American Book Award with her next volume, and Laura Da's new book is also doing very well. Mid-month, Kisha Borja-Quichocho, Jamaica Heolimeleikalani Osorio, Noʻu Revilla, and Tagi Qolouvaki, will each have debut books toward the new Effigies III. This one I am co-editing with Brandy Nālani McDougall and Craig Santos Perez and is entirely Pacific Island-based work. So one of the original poets is now a co-editor. We are a community. Each release balanced gender of new books by Native authors in those respective years. Each book launched a community of women writers simultaneously. They came in together. There is strength in unity.

What is the best advice that you can give an aspiring writer?
While constantly writing your heart out, be patient with timing of reception of the work.

What does your office look like?
Office? I have a hammock from the Orinoco Delta in my bedroom. A coffee table by a loveseat in the living room. Most of the work happens either/or.

Which book do you wish had never been published?
The Birth of a Nation

What is the best lesson that you’ve learned from a book?
Empathy reigns.

Describe the region where the Red Earth MFA is housed. What is the literary community like?
Downtown Oklahoma City is unique for many reasons, foremost the friendships among writers in and out of town. There are few writers in Oklahoma that aren’t co-supportive to a large degree. Our director, administrative staff, and literary partners are the scene, whether or not we are in session. Amazing company.

Would you like to share more about this program?
The VCFA MFA in Writing & Publishing is a brand new program. It is exceptional in genre breadth, hybridity, innovation, and in fostering the art of publishing as well as the craft of creative writing. I think it is brilliant. This program is positioned to set a new standard in program expectations and will surely continue to set the pace in what else MFA programming has to offer, dependent on needs of the field and its working participants.

Why did you decide to join AWP?
To encourage additional platforms for emerging and unrepresented writers. Like teaching for Red Earth MFA and the new innovative VCFA MFA In Writing & Publishing, it is teaching in a great program that demonstrates the value of membership, for our students and our own literary health.